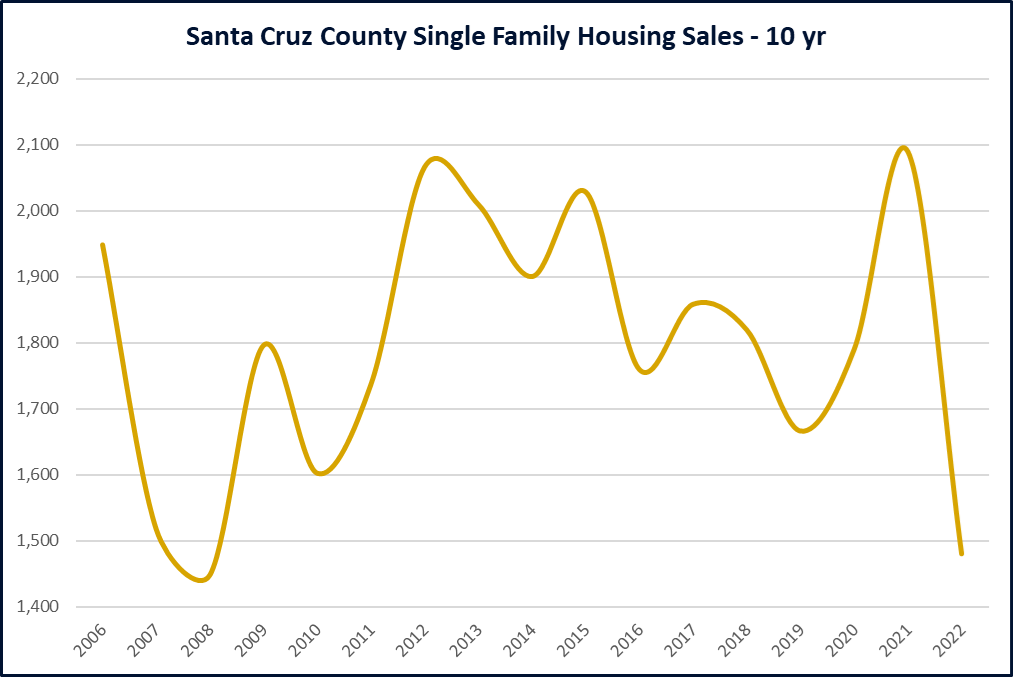 Much can change in 12 months, can’t it? 2022 was a wild year. From a global (news) perspective, this year brought much pain. From a war in Ukraine to financial strains to record-breaking heat waves and a continuation of a global pandemic. The impacts of COVID and the fiscal policy that followed it were felt in the form of inflation surges throughout the world. Nationally, tightening interest rates by the Federal Reserve has slammed the breaks on a previously overheated economy and resulted in continuous speculation of an impending recession.

If you consume the news, all you may hear is doom and gloom. The perspective on real estate trends has mostly been no different. The market has certainly changed and more significant hurt will come to some selected real estate markets. That said, I don’t think Santa Cruz is one of them, nor California. I’ll do my best to provide some context about where we are from a local level and attempt to dissuade those hollering that a “crash” is coming. The easiest way to do this, in my eyes, is with a little (historical) perspective.

Let’s start with a summary of the year that was. A truly historic run of ever-increasing real estate prices continued into 2022 which was the result of an extraordinary constellation of influences. A stock market run, federal stimulus, and never before seen savings due to COVID lockdowns. Despite some clear signs of heating inflationary pricing midway through 2021, the Federal Reserve was reluctant to increase rates for fear of triggering a recession. This provided incredibly cheap buying opportunities for a populous that still had more money than ever before. Everyone just kept shopping. March, the same month that the FED announced their first of what would become a series of rate hikes, real estate pricing in Santa Cruz County hit an all-time high. The median home price in March ’22 was $1.6M. Homes were selling 9% over asking price, on average.

Despite rate hikes, inflation continued to rise forcing the FED to take a more aggressive approach. Realizing that the FED rate isn’t the only factor contributing to mortgage rates, its impact was significant. According to data pulled from freddiemac.com, mortgage rates jumped from 3.11% in January to 5.81% in June to 7.08% in November before leveling out at 6.42% at the conclusion of the year.

Buyer’s expectations changed in a hurry as, finally, a “deal” could be had. Seller’s expectations took a lot longer to adjust. The combination of fewer buyers and longer Days to Sell resulted in fairly significant increases in Active Inventory, another contributor to downward price pressure. At the same time, this change in mortgage rates and the market as a whole had a similar sluggish impact on sellers. For many, if they didn’t want to sell in 2021, why would they now? Especially to trade their historically low rate for a much pricier one. While the prosperous 10+ year real estate run was hugely valuable for wealth building, it also created a county of immobile homeowners. Many sitting on their hands wondering how to avoid the government taking a significant split in the form of capital gains.

2022 had the second lowest number of sales for Santa Cruz County on record, behind only 2008. Dueling forces of decreased buyers and sellers was a theme of 2022. I expect that to continue in 2023.

You’re probably saying “sounds pretty doom and gloom to me”. Like a cognitive shift from an astronaut experiencing the Overview Effect, it’s time to zoom out for perspective. 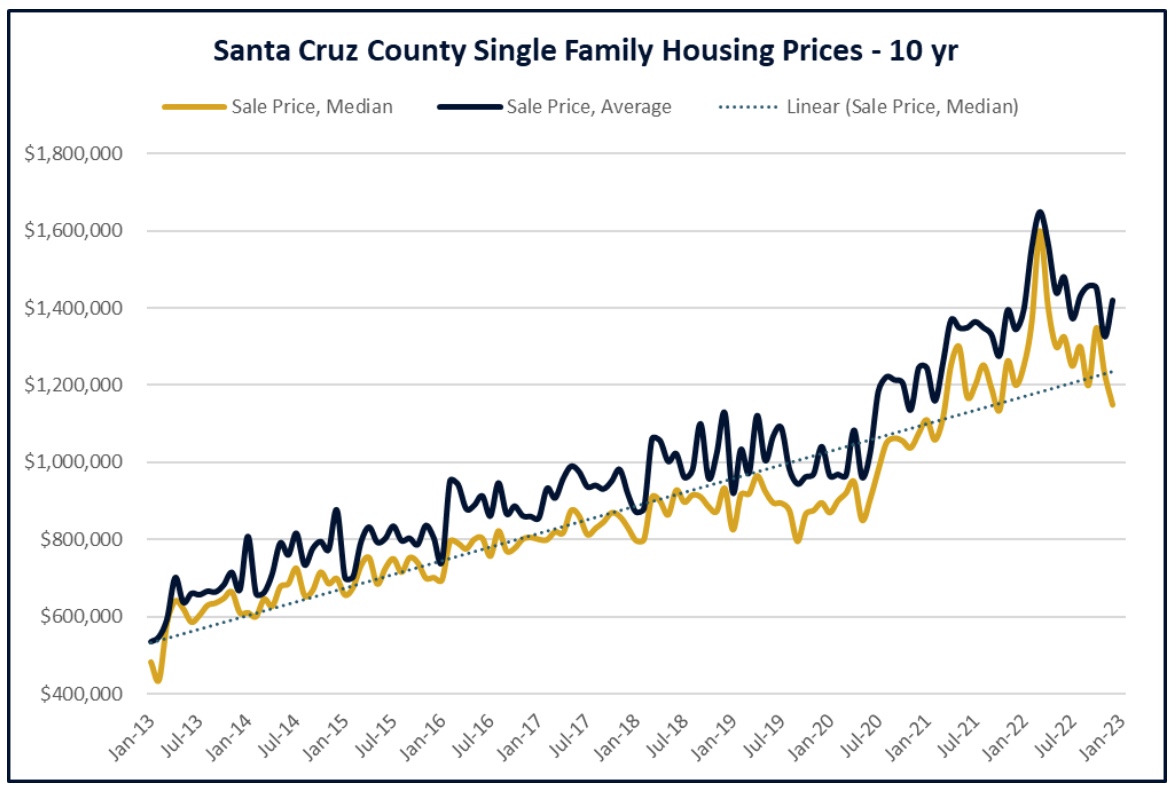 Ignoring other metrics besides price does turn a blind eye to the fact that the market has changed. This is not the historically strong real estate market we saw from March ’20 to March ’22. Median price peaked in March ’22 at $1.6M and concluded the year at $1.149M. Days on Market peaked in May ’22 at 13 and ended the year at 37. The Price to List Ratio went from 109.8% in April ’22 to 93.7% in December ’22… partially the result of sellers holding onto price expectations of yesteryear. The pendulum has clearly swung from seller leverage to buyer leverage.

In the medium term, the market players will adjust. They always have. This is the least predictable time period. We essentially have two paths. The first is that some additional pain occurs in the medium term, especially if we do enter a recession where the tech industry takes on additional losses. Even then, the market for Coastal Real Estate should remain fairly strong. You can read about how Recessions rarely result in reduced housing prices in my blog “How Recessions Impact Real Estate”. The second scenario will likely occur in some fashion whether a recession occurs or not. At any point, we will reach an inflection point where the new, “improved” pricing will create a surge of interested buyers (putting opposing upward pressure on pricing). Low inventory will remain systemic as long as there is little external pressure to sell (like going under on a mortgage). Interest rates will eventually cool and when they do, buyers will come roaring back. We’ll see another surge. It likely won’t be to COVID levels but more so a steady increase in the value of Santa Cruz Real Estate.

The long-term is easily the most predictable. We have decades and decades of evidence on how local and national real estate behaves. Over time, prices will continue to rise. Santa Cruz Real Estate will become an even more precious and rare commodity. Homeowners will have a remarkable path to long-term prosperity. Why? Because real estate is an investment favored by time and it’s especially favorable on the coast. They’ll benefit from debt paydown, incur great tax benefits, and gain significant equity in the form of appreciation.

So, if you are considering becoming a Santa Cruz homeowner, reach out! As always, thanks for reading.