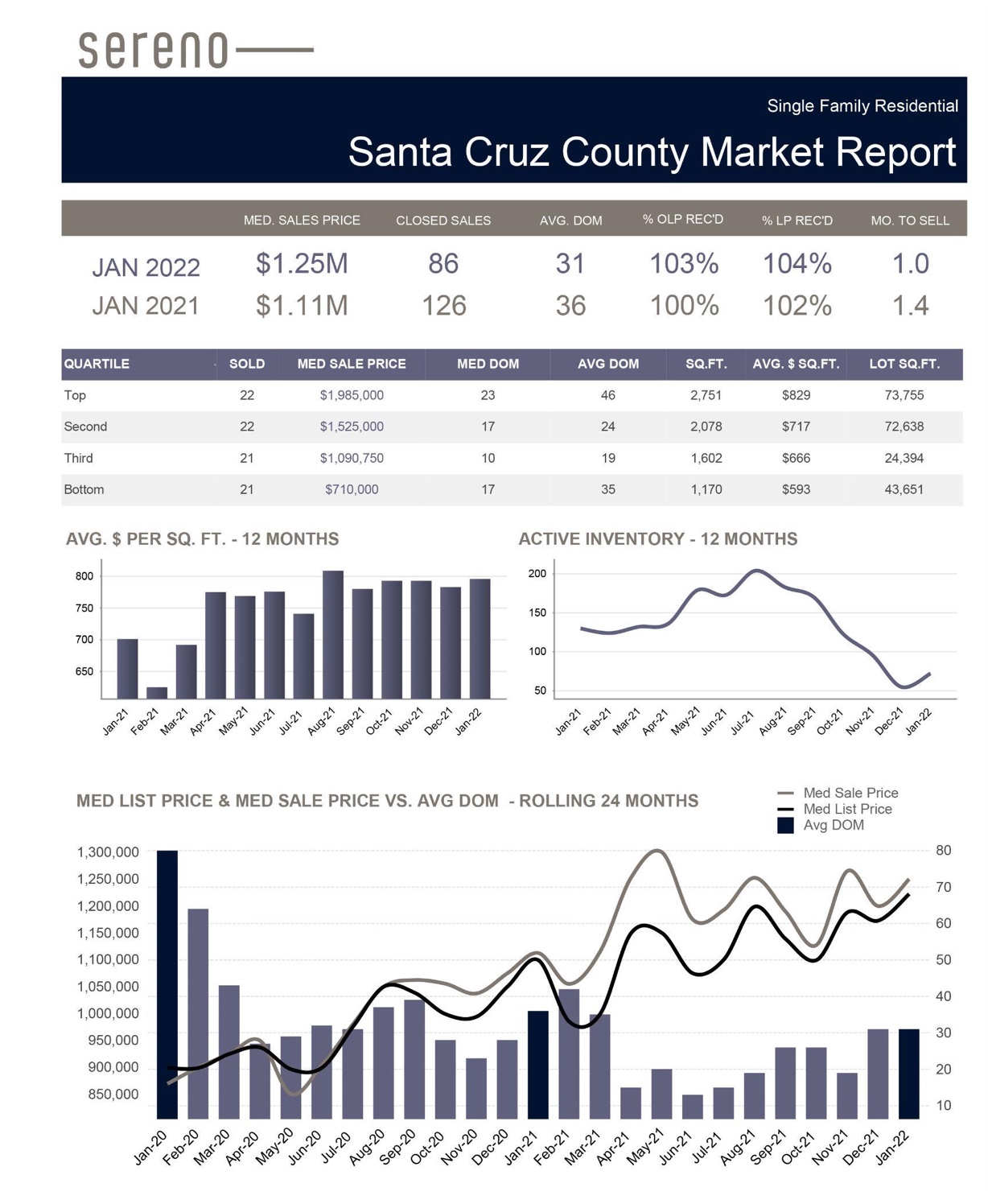 A Steep Rise in Santa Cruz Condo Prices to Start the Year!

January ushered in an all-time high for the median price of condos by a significant margin. Increasing numbers of buyers are gravitating towards condo/townhome purchases as prices for more preferred single family residences continue to appreciate beyond their reach.

There are lots of funny/not so funny observations floating around about how the start of 2022 feels more like the13th or 14th month of 2021 than it does the beginning of a new year, but let’s check the sales data for January and see if we can spot anything new or unusual in the realm of real estate (beyond the crazy 2021 market that saw an even bigger post-covid bump in the number of buyers scrambling to find homes!)

January was mostly business as usual for Coastal real estate as it continued to pad the gains of the longest running, highest appreciating seller’s market ever. The median price for single family residences (SFR) showed a moderate year-over-year jump of 12%, going from $1.11m in January of 2021 to $1.25m last month. That number fits easily into the range of the new normal that was established last year when the all-time high for median price also reached $1.3m in May of 2021.

As far as the all-important active supply of SFRs on the market, January’s inventory hovered in record low territory with a scant, one month supply of listings compared to the 1.4 month’s active supply Santa Cruz County had in January of 2021.

The only SFR statistic notably lower or slower last month was the actual number of closed transactions that took place – 86 sales compared to 126 in January of 2021. That drop reflects the precipitous lack of listings rather than a lack of demand. (Note that in low inventory markets, the highest prices are often seen in those months with the fewest transactions – a testimony to the increased competition for fewer available listings.)

The biggest surprise in January came in the sale datas for the condo/townhome category of homes, indicating that the market might be primed for further significant acceleration rather than just a heightened version of business as usual. 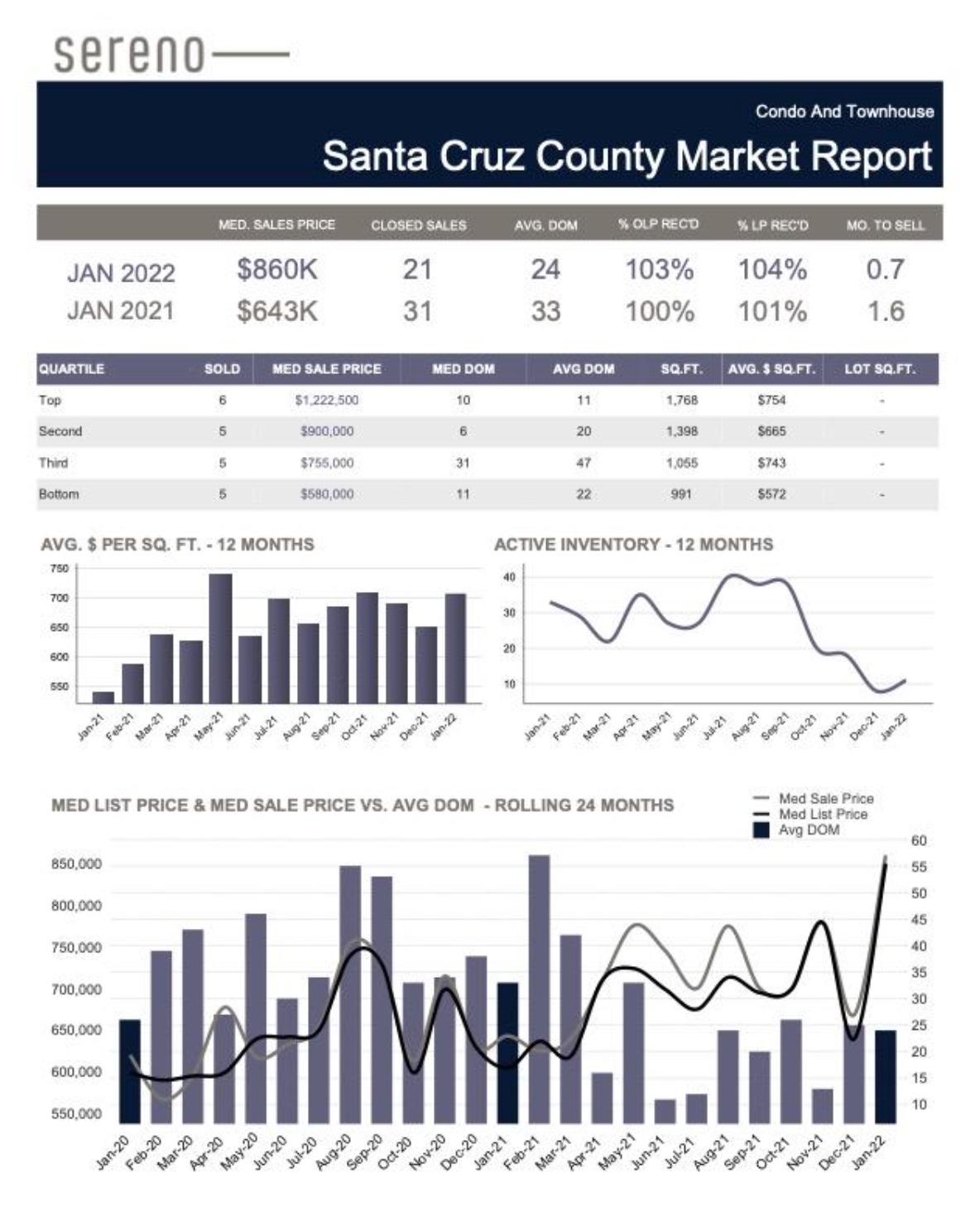 Average days on market for condos were down year-over-year dropping from 33 in 2021 to 24 last month.  The percentage above list price that they sold for clocked in at 104% compared to 101% in January of 2021.  And perhaps hinting at the most significant portent of things to come there was only 0.7 months supply of condo listings heading into February, a condition that’s certain to keep continued upward pressure on prices.

Historically,  the condo/townhome market has tended to appreciate at a higher percentage than SFRs when the market is approaching the late phases of its “up” cycle. As more buyers get priced out of their preferred single family category of homes, they often turn their attention to their second choice of condos/townhomes as more affordable alternatives.  The increased demand drives a higher percentage of price increase for condos/townhomes.

Here’s a list of condos and townhomes that sold in January in Santa Cruz County. 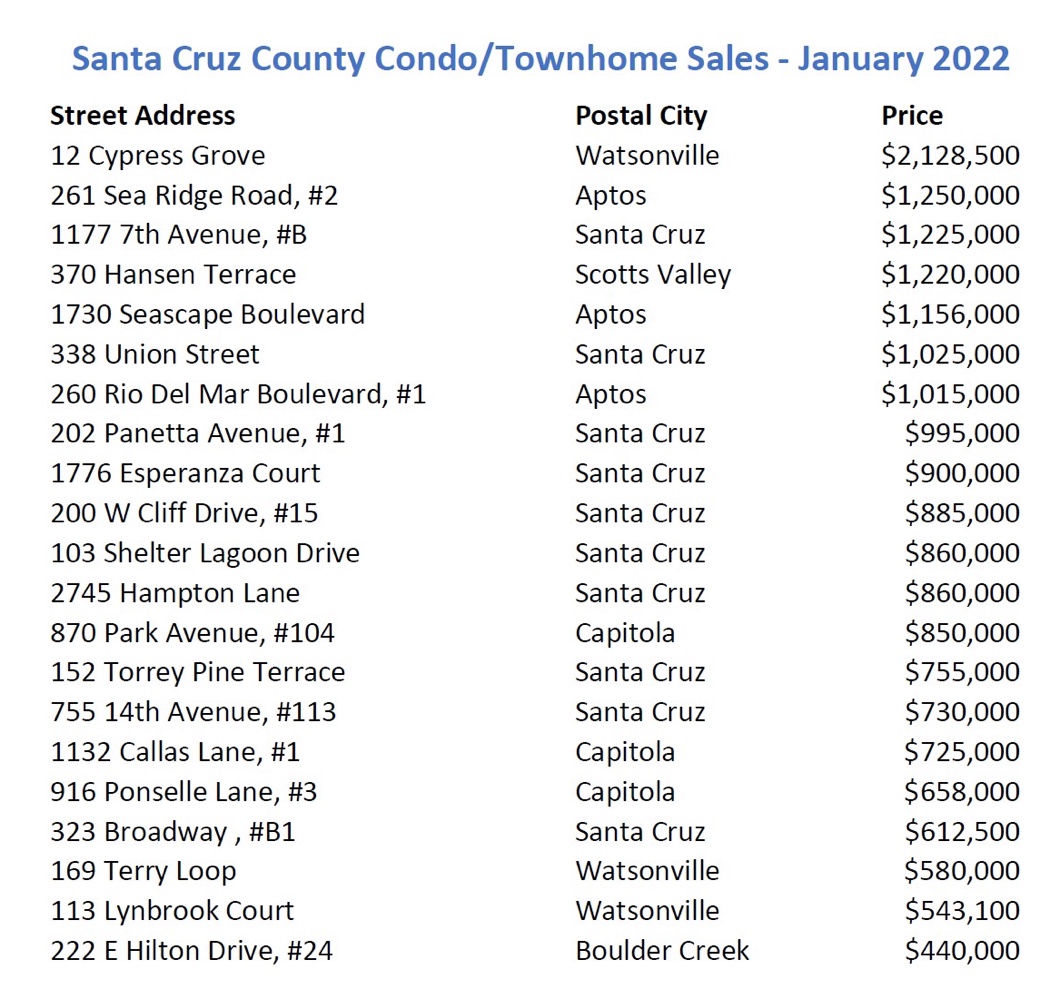