Dax’s Data: Determining who Santa Cruzans are thru Census Data

Keep Santa Cruz Weird… a phrase coined by locals to concisely describe our unique community. The “keep” in the phrase can be seen as a protest against change. Change is, of course, inevitable. Santa Cruz has seen an influx of change since its official inception in 1791. Presently, this change is only accelerated as more and more people discover this quiet coastal gem.

What has become increasingly apparent for those that grew up in this community is that it is becoming harder to stay. Not because we don’t want to but because many can’t afford to.

Affordability is the main cause of the “max-exodus” in California. According to census.gov, California had the largest number of domestic migration losses of any state from 2020 to 2021 (-367,299).  Of course, that is skewed because CA has the largest population. The population overall declined though. From 2020 to 2021, California’s population dropped by 261,902 ranking 2nd in numeric decline and 5th in percentage decline.

Not to fret homeowners, there will always be plenty of people that want to live in California. According to a study done by the University of California, the majority of Californians still believe in the “California Dream” and California’s economy still attracts as much venture capital as all other states combined. Those leaving are often leaving due to affordability. Data pulled by PPIC showed that migration among adults was concentrated among lower to middle-income individuals. 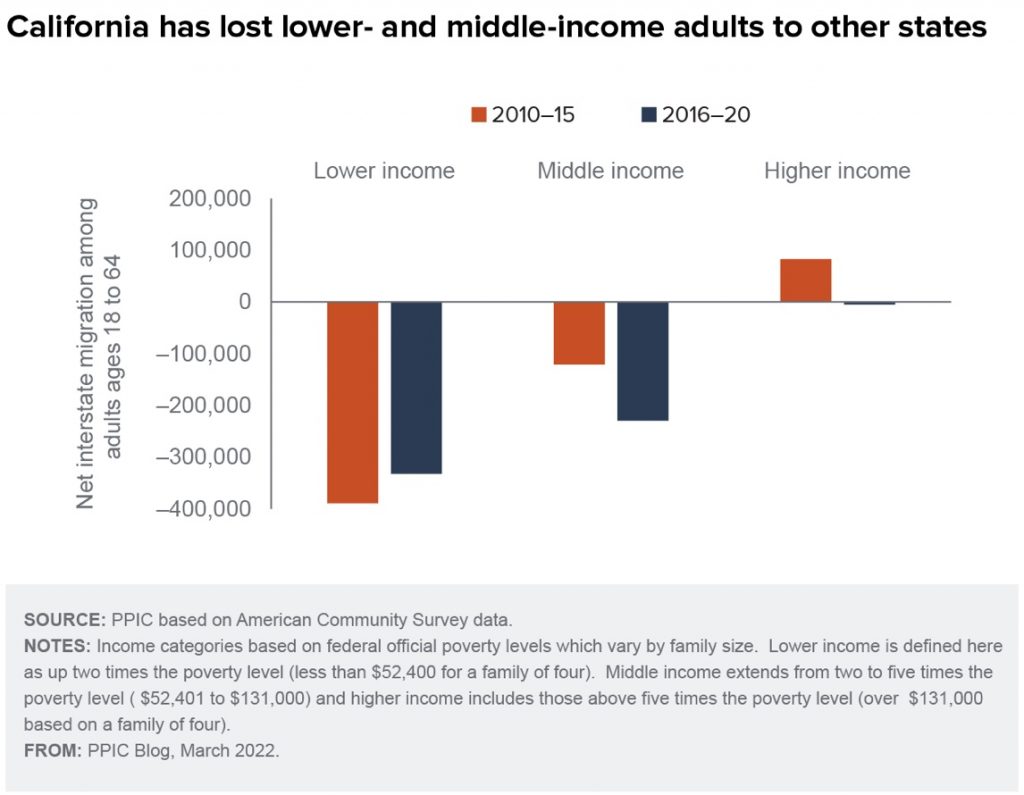 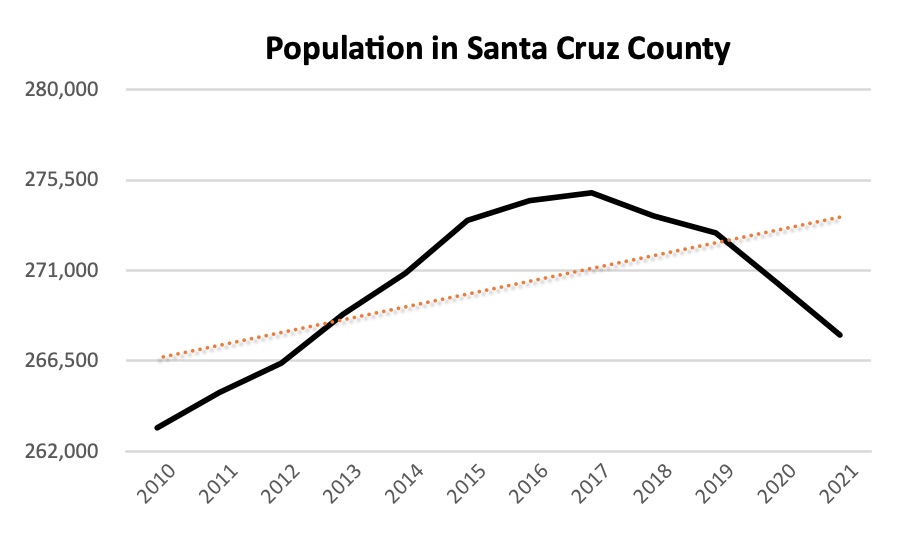 Population data is great and all but let’s talk about who Santa Cruz is… at its core and from a data perspective.

Santa Cruzan’s are farmers, construction workers, lawyers, scientists, educators, nurses, doctors, dental hygienists, realtors, artists, bartenders, food service workers, CPAs, gardeners, athletes, and so much more. We certainly have an entrepreneurial spirit in us. Nearly 10% of the workforce is self-employed (CA: 7.4% USA: 6.1%). We also have over 10,000 veterans amongst us. We are protective of our sanctuary and full of gratitude that we can call this place home.

Of the 267,792 Santa Cruz Residents, 142,521 civilians are in the labor force. In the general category of Occupation, nearly half (48.1%) are in the Management, business, science, and arts occupations. When we break the labor force into industry: 24.3% of Santa Cruz Residents are in the category of Education services, and health care and social assistance, 15.1% are in the category of Professional, scientific, and management, and administrative and waste management services¸ 10.9% are in Retail trade, and 9.4% are in Arts, entertainment, and recreation, and accommodation and food services. Retail trade excluded, all the above rank as a higher percentage of the total labor force compared to the state and national percentages.

Arts, entertainment, and recreation, and accommodation and food services

9.4% of SZC population: Occupation by Share for “Arts, entertainment, and recreation, and accommodation and food services” Chart Source: datausa.io

Many of us also have the freedom and flexibility to work from home. 24% of the Santa Cruz County labor force works from home compared to 21.4% for the state and 17.9% for the nation as a whole.

The barrier to entry for first-time homebuyers is incredibly high. Once you’re in though, you have a tangible asset that will go up substantially in value over time. Both these facts help explain the age distribution below.

Age gives a great indication of who we are as a community. Affordability is a huge contributor to the age distribution below.

The chart shows the percentage of the total population in the specified age group.

A few fascinating trends arise when you look at the age distribution chart. First, how far we are behind the rest of the state and country in the matter of pre-teen children. It makes more sense once you realize Santa Cruz County trails significantly when it comes to adults in the age range of 25-44. 23.91% of the Santa Cruz population is in that range compared to 28.65% for California and 26.76% for the USA.

We do have a much higher percentage of young adults. Growing up here, my hypothesis is, due to the cost of living, young adults live with their parents longer. Once they are ready to move out, it’s often away to college, away for a job, or away for a more affordable cost of living. That was the experience of many of my friends who have settled elsewhere. For the many that do stay, in all likelihood, they won’t be pressed into seeking a single-family home right away. The median age for first time mothers in the U.S. surpassed 30 for the first-time ever. It’s even older in big cities and on the coast.

We are a quiet, older community overall. Prices have pushed out many of our younger generation and we have lower child rates as a result. From a real estate perspective, there will be many effects. Millennials, the largest cohort of homebuyers (43% according to NAR), are less of a factor here than in other parts of the country. The Millennials that are impacting our market are frequently employed in the tech industry and garner high-paying jobs. The tech industry also produces many second-home buyers.

The long-term impact of this age distribution isn’t entirely clear. One impact I can project is fewer listings. The older you are, the less likely you are to move. According to the Census, “At age 18, a person can expect to move another 9.1 times in their remaining lifetime, but by age 45, the expected number of moves is only 2.7.”

A large segment of the aging population will want to stay in their home for as long as they can. Others though will still be inclined to move. Whether it is to be closer to grandchildren, to downsize and reduce the burden that maintenance requires, or to find the perfect beach home to spend their retirement years. Over the long term, properties will be passed down and inherited with a mix of cash-outs and keep-and-holds.

Reach out for all of your real estate needs. Thanks for reading.