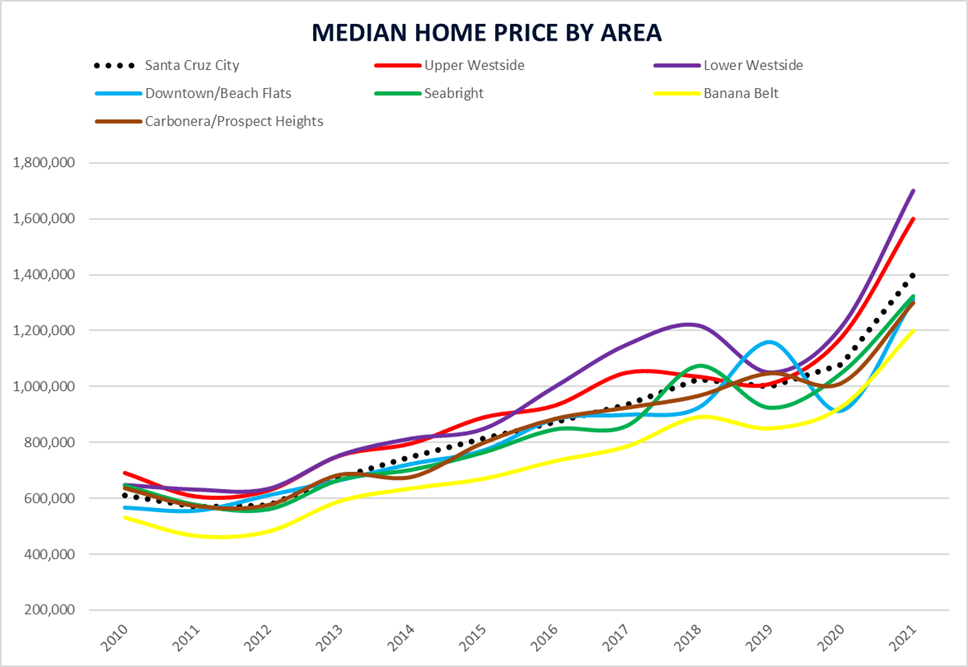 Last month we dove into how each township in Santa Cruz County compares. This month I wanted to zoom in and get hyper-focused on one area in particular, the city of Santa Cruz. Our deep dive into the county showed us just how strong of a market Santa Cruz is, ranking in the top half of every major real estate category since 2010. What neighborhoods are driving the strong numbers and what neighborhoods benefit from their excelling neighbors?

If you didn’t get an opportunity to read about how areas in Santa Cruz County compare, you can read up on it here.

Before we dive into the numbers, let me first dive into the how of the analysis. The how is simple; I mapped out each area and pulled all the important real estate market metrics dating back to 2010. The areas were determined by loosely defined neighborhoods and combined, when necessary, to reach an ample sample size. The areas are defined as follows: 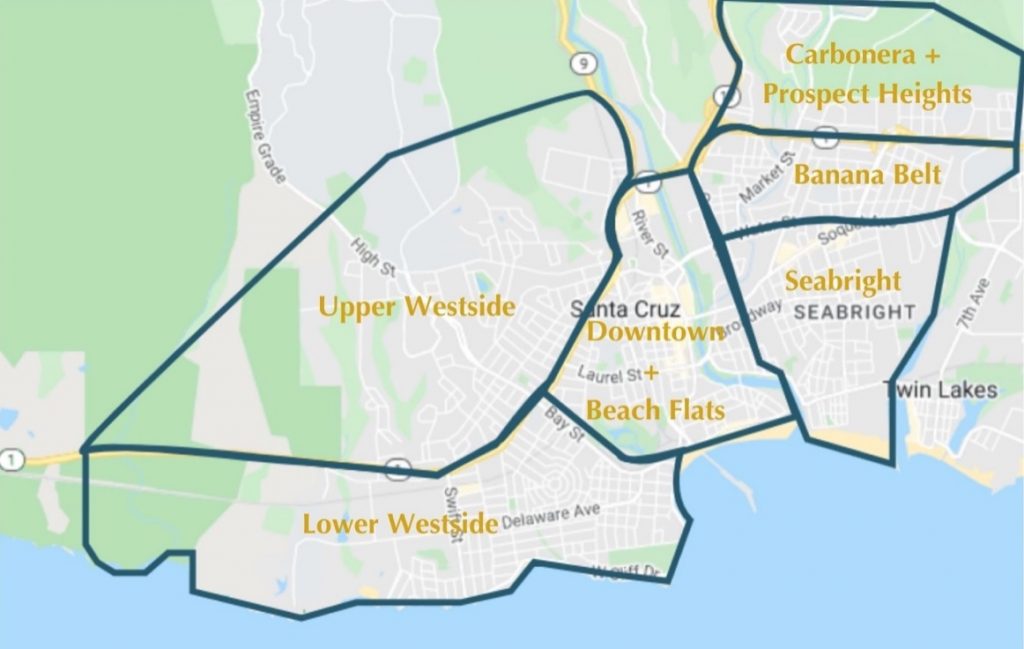 Upper Westside: Wrapping down from Highway 9 (River St) and hooking along the northside of Highway 1 to Wilder Ranch.

Lower Westside: On the south side of Highway 1, east to Bay Street, and west to Wilder Ranch.

Downtown/Beach Flats: West of Ocean Street and East of Highway 1 with the southern cutoff at Bay St.

Seabright: Ocean Street cutoff to the west, Water Street to Soquel in the north, the Santa Cruz Harbor to the east, and the beach to the south.

Banana Belt: Ocean Street cutoff to the west, bordering Seabright on the south, and Highway 1 to the North.

Carbonera/Prospect Heights: Although very different, sample size requires they be combined. This area is defined as east of Highway 17, north of Highway 1, and west of Live Oak.

The best indicator to determine appreciation is median home price. Median home price is ideal when analyzing smaller sample sizes because it eliminates outliers by highlighting the data point smack dab in the middle of the data set. Let’s dive in:

While the most significant gainer of late has been the Seabright area, the crown jewel of the Santa Cruz market is the Westside. Since 2010, Lower Westside and Upper Westside rank #1 and #2 respectively in median home price. In fact, these two neighborhoods are the only two of the 6 to rank above the city average. Carbonera/Prospect Heights and Seabright round out the top 4.

Notable from the percentage change chart is that every single one of these areas excelled in 2021, jumping between 26.2% and 43.4% from the year prior! The percentage gain is a true metric separator between these neighborhoods. The clear star in this category is the Lower Westside, which has gained 162% in median home price since 2010. That is in stark contrast to the low-end gainers in Seabright and Carbonera/Prospect Heights, climbing 104% each since 2010. If you own in any of these areas don’t fret, doubling the value of your home in less than 12 years is exceptionally strong.

Slight variations arise when comparing average and median home prices. Seabright jumps up to 3 while Carbonera/Prospect Heights dips from 3 to 5. Coastal areas with beachfront property see higher averages because they tend to be more influenced by high-end outliers whereas inland areas such as Prospect Heights are more likely to have a lower cap for high-end listings.

Median is preferred to avoid the influence of outliers. The smaller the sample size, the more potential influence an outlier can have. Let’s check out how each area’s sales volume compares. 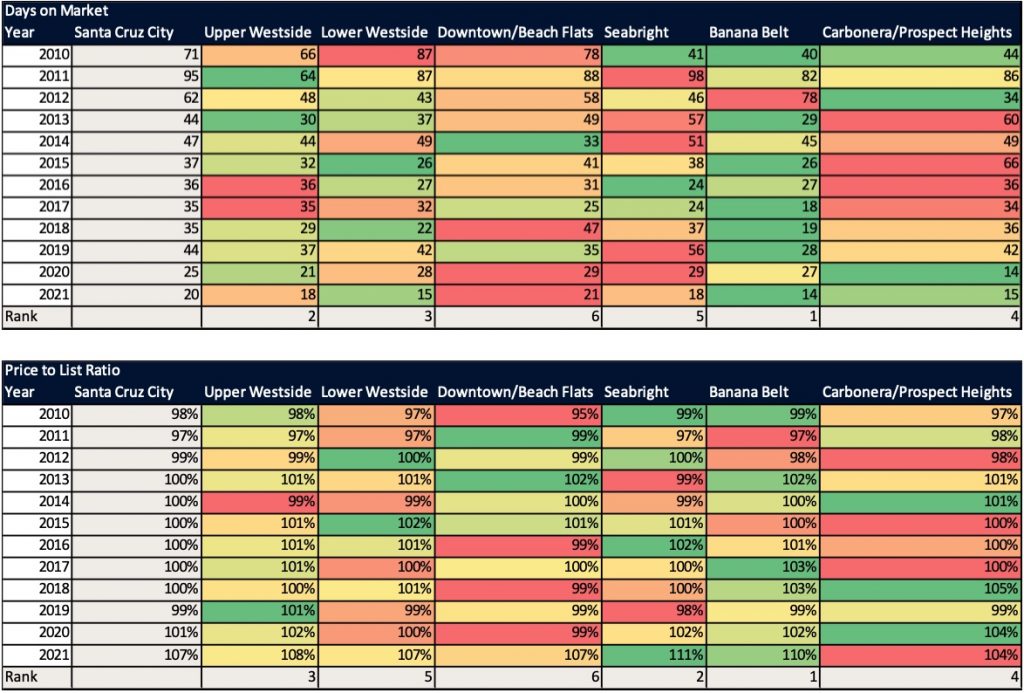 While every neighborhood in Santa Cruz has been strong, the Westside is the major driver in increasing overall market metrics for the City of Santa Cruz. Let’s see how each area compares:

Ranking #2 in both median and average home prices, the Upper Westside is key to the strong Santa Cruz City market. What is probably more impressive is its #2 ranking in % change since 2010. The Upper Westside is the largest market by sales volume amongst the city areas. It also sells quicker and for a better Price to List ratio than the city average.

Downtown/Beach Flats ranks 5th and 4th in the median and average home price, respectively since 2010. It’s seen strong growth in both the median dollar gain and percentage change, ranking 3rd in both. It’s the smallest of all areas analyzed in Santa Cruz City and ranks last in both Days on Market and Price to List Ratio.

Seabright’s centralized location and proximity to the freeway have been a driving force behind very strong area demand of late. In fact, Seabright ranked 3rd in both median and average home prices in 2021. Since 2010 though, Seabright drops back in the pack ranking 4th and 5th in the median and average home price, respectively. What is more startling is its percentage gain since 2010. It’s seen a gain of 104.8% since 2010, ranking 5th in the city. Seabright is the 3rd largest market by volume in the city. It takes longer to sell on average than most but has produced the 2nd best Price to List Ratio since 2010.

Although the Banana Belt runs right along with county averages for median and average price, it ranks last in both areas for the city of Santa Cruz. It’s the fourth largest market in the city by volume and, while the prices are lower, the homes sell faster and for a better Price to List Ratio than other areas in the city.

Carbonera and Prospect Heights are vastly different but were combined for the purpose of gathering an ample data size. The area ranks 3rd in median price and 5th in average price indicating that, while it lacks high-end outliers, most of its homes are clustered near the strong median price. It’s the second smallest area of the bunch and ranks a marginal 4th in both DOM and Price to List Ratio.

Want to learn more about your area? Give us a call.