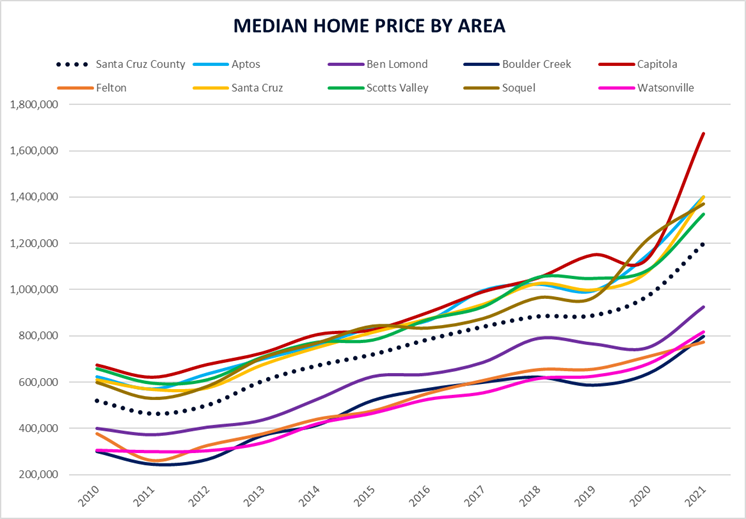 What we know from previous analysis is that the Santa Cruz County real estate market has been on a tear since 2012 when the recovery from the ’08 housing crash solidified itself. What I intend to show is that not all areas in Santa Cruz have experienced the same level of appreciation and growth. Some areas have pulled averages upward while others dragged averages down.

I focused specifically on townships within Santa Cruz County with enough of a yearly sample size in homes sold to make meaningful determinations of the data. The final count was 8 townships: Aptos, Ben Lomond, Boulder Creek, Capitola, Felton, Santa Cruz, Scotts Valley, Soquel, and Watsonville. Excluded due to lack of volume were towns like Davenport, Brookdale, and Los Gatos (SZC).

The first indicator of appreciation is median home price. While not a perfect tool for determining the exact appreciation of your home, it does give a really good indication of how the market has changed as a whole. Agents prefer to present median price over average because it is less susceptible to outliers that could influence the data set.
Here are the numbers by area:

The column on the left, labeled “Santa Cruz County”, is the average for the county as a whole. The first thing you’ll notice is that Capitola, Aptos, Scotts Valley, Santa Cruz and Soquel have a significant impact on pulling the county average upward. While I felt that the Capitola and Aptos markets were strong, it was quite shocking to see that the median home price in 2021 was $1.67MM and $1.40MM, respectively. Since 2010, Capitola ranks #1 in median home price.

While median price is great, percentage change gives us an indication of just how much the area has appreciated compared to its neighboring cities. Some of these numbers come as a bit of a shock. The dollar amount change since 2010 runs in fairly close alignment with the median price rankings, with minor variations. The percentage change, which is as close of an indication of appreciation that we can get, tells a vastly different story. While Watsonville was last in median home price, it was first in the percentage change with 167.1% change since 2010. Meaning if you parked your money in a home in Watsonville, you likely saw the largest percentage gain in value out of all areas in Santa Cruz County since 2010. Boulder Creek was 8th in the median home price rankings but second in percentage gain. Makes sense though, doesn’t it? As homes in Santa Cruz (and surrounding towns) get more expensive, people look to other nearby areas for more affordability. Now, I find Capitola at 3rd highest percentage gain even more impressive. As homes get more expensive, a larger dollar amount is required to reach the same percentage gain as their less expensive neighbors. Soquel, Santa Cruz, and Capitola saw gains of 22.1%, 29.6%, and 47.3%, respectively in 2021. The last and most striking takeaway from the charts above was Scotts Valley. In 2010, Scotts Valley had the 2nd highest median price. In 2021, it had dropped to 5th highest. Scotts Valley has seen the smallest percentage change of all 9 cities analyzed since 2010.

The observation that jumps out most is the significant jump from median to average price for Aptos, Santa Cruz, Soquel, and Watsonville. This reflects why we, as real estate agents, prefer median home price as a gage of the market. It’s clear these markets are influenced by high-end outliers.

Speaking of outliers… the larger the sample size, the less influence outliers have. Let’s take a look at the number of sales and new listings since 2010.

What sticks out most to me is that Boulder Creek saw, by far, its most sales in 2021 of the twelve years analyzed. Capitola, meanwhile, was the only city to have fewer sales than the year before. To be fair, they also had fewer new listings so that was, by definition, inevitable. The reality is that homes listed are selling, and quickly. Many factors are at play here but the lack of new listings runs contrary to many predictions that high prices would incentivize more homeowners to sell their homes.

While Ben Lomond and Felton rank low on the median and average home prices, they excel at selling quickly and at or over the asking price. Just see the data below. They rank #1 and #2 in both categories.

What is clear by the data is that certain areas are having more of an impact in driving up averages. Let’s dive into each city and see how it compares to its neighbors and the county as a whole:

Ben Lomond has a downward impact on overall the median and average prices for the county. It ranks 6th in both median home prices and average home prices over the last 12 years. It’s the seventh-largest in Santa Cruz County. While Ben Lomond sells for less, listings sell the quickest in the entire county, on average. They also have the best price to list ratio meaning homes are more likely to sell at or over the asking price.

Capitola ranks #1 in both median and average home prices since 2010. The median home price hit $1.68MM in 2021! While the Median dollar gain ranked #1 since 2010, more impressively the % change ranks 3rd amongst the nine cities at 149%. Capitola saw a median gain from 2020 to 2021 of 47.3%! Capitola is the smallest market of the 9 evaluated. It’s smack dab in the middle when it comes to Days on Market and Price to List ratio, impressive considering the high price point.

Like its mountain neighbors, Felton ranks near the bottom of median and average home prices for Santa Cruz County, 7th and 8th to be exact. Also like its neighbor in Ben Lomond, Felton ranks #2 in both Days on Market and Price to List ratio. Felton hasn’t quite seen the same level of appreciation that the rest of the county has seen. It ranks last in the median dollar amount change and second to last in percentage change. That said, over doubling homes values in twelve years is really strong. Felton is the 6th most active market in the county.

Santa Cruz is the largest of the markets in Santa Cruz County real estate. It’s also one of the strongest. Santa Cruz ranks in the top half of every major real estate category since 2010. It is a market that has an upward impact on median and average prices for the county. Santa Cruz gained 29.6% in median price from 2020 to 2021 propelling it from 5th to 2nd in the county. Santa Cruz ranks 4th in median price and 3rd in average price since 2010. Impressively, Santa Cruz has seen the 5th largest % median gain since 2010 and ranks 2nd in price/sqft. Homes in Santa Cruz are also quick to sell, ranking 3rd in Days on Market and 3rd in Price to List ratio.

Scotts Valley is the strongest amongst cities not on the coast. It ranks 3th in median price and 5th in average price since 2010. Surprisingly though, Scotts Valley is last in the county in appreciation with a 101.4% gain since 2010. Scotts Valley dropped from 1st in median home price in 2018 to 5th in 2021. It’s the 5th most active city and ranks 4th in both Days on Market and Price to List ratio.

Soquel is the 2nd smallest amongst the group. It has the 5th highest median price and 4th highest average price. It ranks 4th in median dollar change and 6th in % change since 2010. Similar to Aptos, Soquel has a high price point but takes longer to sell. It ranks 8th in Days on Market and 8th in price to list ratio.