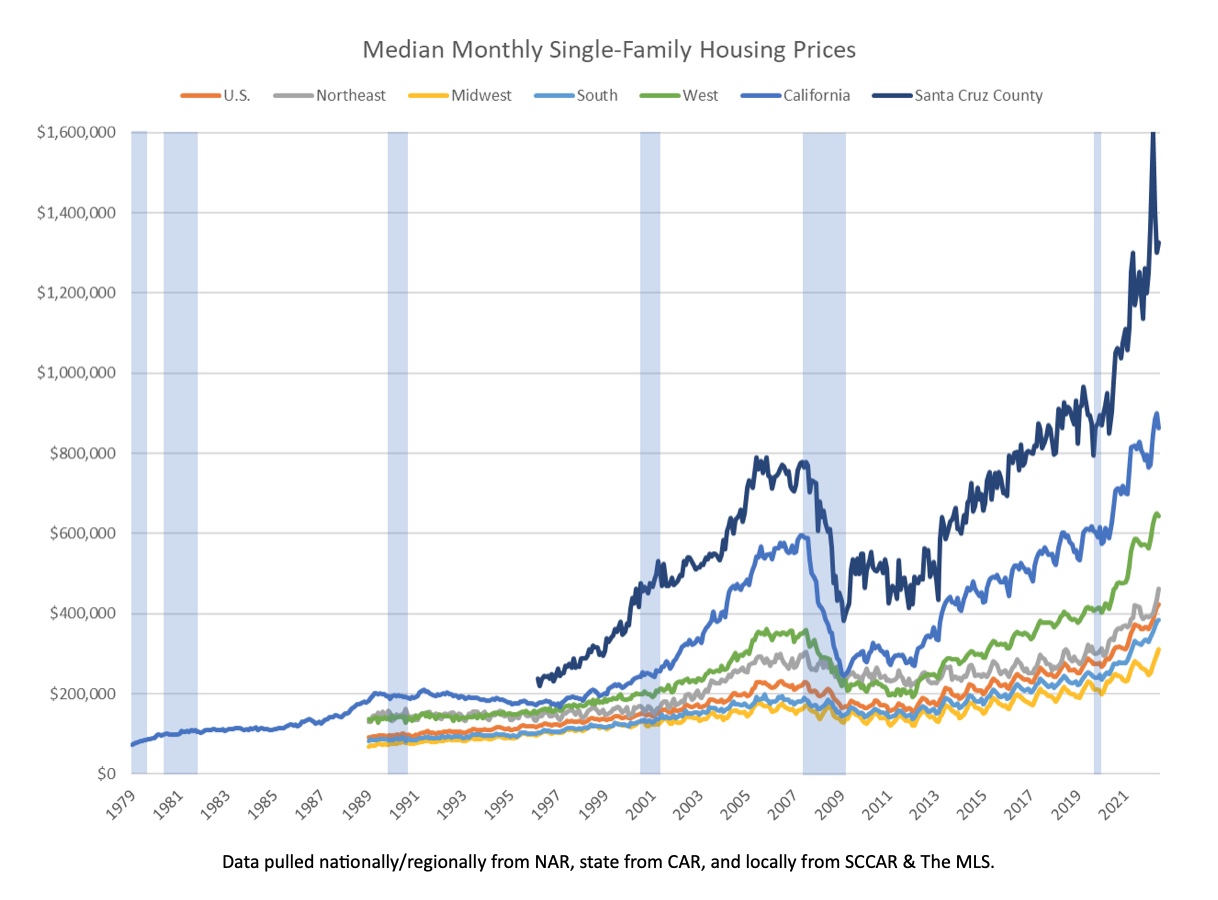 The dreaded big R. No, R doesn’t stand for Real Estate, it stands for Recession and as you’ll read below, one doesn’t always impact the other. The big R-word has been thrown around quite frequently of late and it’s got people spooked. Spooked that this real estate market is going to take a turn for the worse. Some buyers have even used the term “crash”. While people are rightfully cautious because of our last significant recession, recency bias is playing a major role in how the real estate market has reacted to news of a potential upcoming recession. We, as humans, are flawed creatures. We tend to place a disproportionate amount of weight on more recent events i.e., recency bias.

I don’t know for certain that we are, in fact, headed for a recession. I do know, however, that it doesn’t necessarily mean that it’ll impact the housing market if we do enter one. The bulk of the real estate impact is already occurring as interest rates are hiked to combat inflation (potentially causing a recession). Contrary to recent viewpoints from our experience with the 2008 housing crash, historically, real estate fares well during recession times. In fact, as you’ll read below, prices typically continue to rise.

In this Dax’s Data, I dive into the impact that recessions have had on the national, regional, state, and local markets. Before we dive into the impact of recessions, let’s first define a recession. A recession is defined as two consecutive quarters of negative GDP. GDP (Gross Domestic Product) is the monetary value of the final goods and services produced in the USA. If we produce less than the previous quarter for two consecutive months then we are in a recession. Recessions typically last 1-2 years.

There have been fifteen recessions in the last 100 years. The data I am going to present spans back to 1968. Eight recessions have occurred in that timeframe and, on average, last 10.6 months. The metric that I’ll be focusing on is Single-Family Median Home Price. While I realize that there are plenty of other metrics that help determine Real Estate market strength, prioritizing prices gets to the crux of the question, “will prices crash”?

Let’s look holistically, then we will dive into each individual recession. 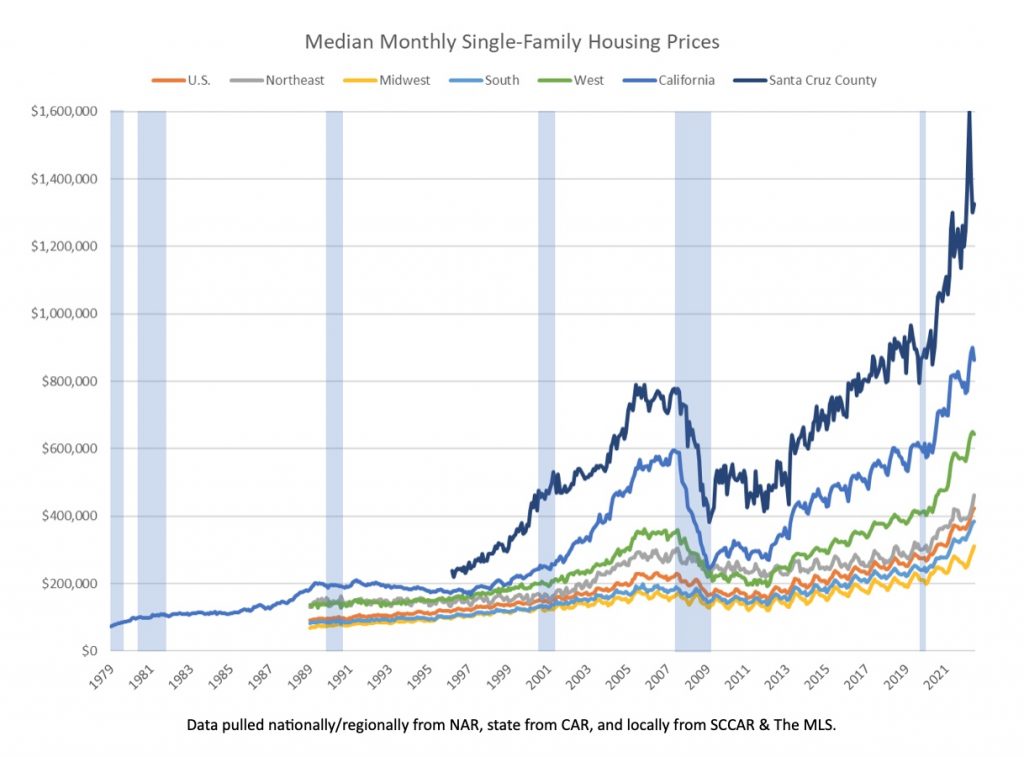 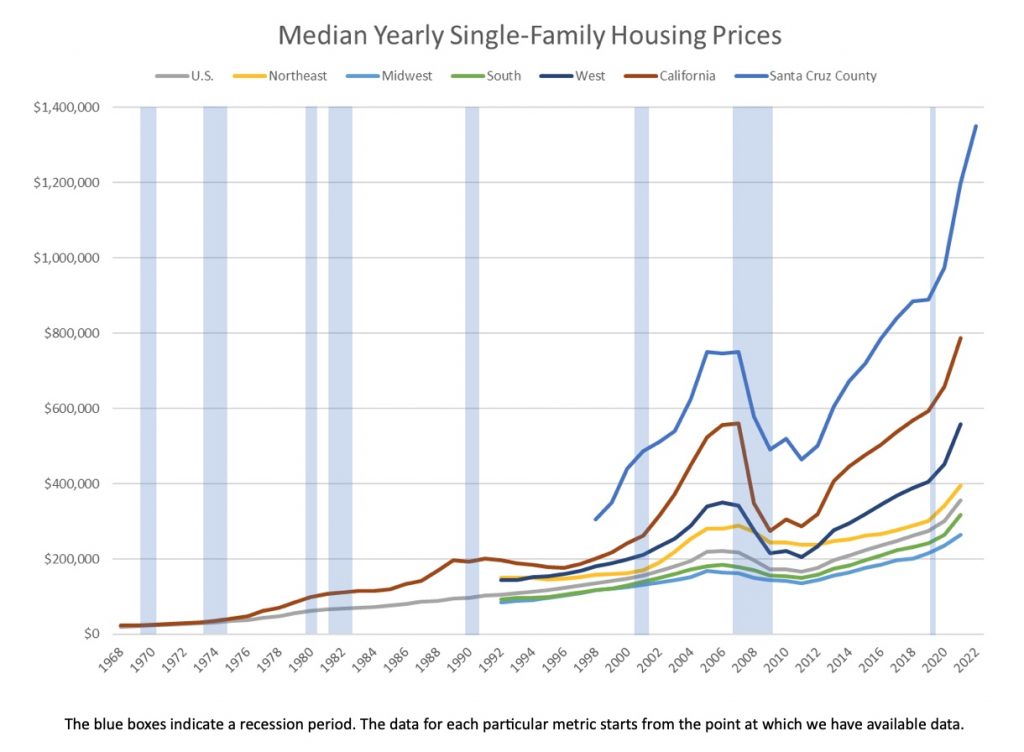 The data for each particular metric starts from the point at which we have available data.

A couple of things become clear when you zoom out, first, there aren’t any noticeable dips in prices during a recession with the exception of 2008. The second observation is just how much, comparatively (from a dollar perspective), the median home price has grown in Santa Cruz County, California, and the West region as a whole. More on appreciation in another blog.

Let’s dig into each recession.

Conclusion: The recession had minimal impact on real estate as both the National and State Median home prices increased from the previous year.

Conclusion: The recession had virtually no negative impact on real estate pricing nationally or in California. Some of the growth can be attributed to the high inflation rate of the 1970s.

Conclusion: Home prices still grew during the 1981-1982 recession but inflation was historically high in ’79, ’80, and ’81. Home price growth could not keep up with the inflation rate.

Early 2000’s recession: The result of the Dot-com bubble (among other factors). This recession lasted 8 months from Mar 2001 to Nov 2001. We have US, regional, California, and local monthly and yearly data. Year-over-year, every area performed well in terms of median price growth. US median price grew 6.3%, California grew 8.7%, and Santa Cruz County grew 11%. Although looking at the monthly data, prices stayed relatively flat during the period from Mar to Nov 2001.

Conclusion: The year-over-year growth was really strong. When zooming in, the majority of the growth occurred just prior to and just after the defined recession period. 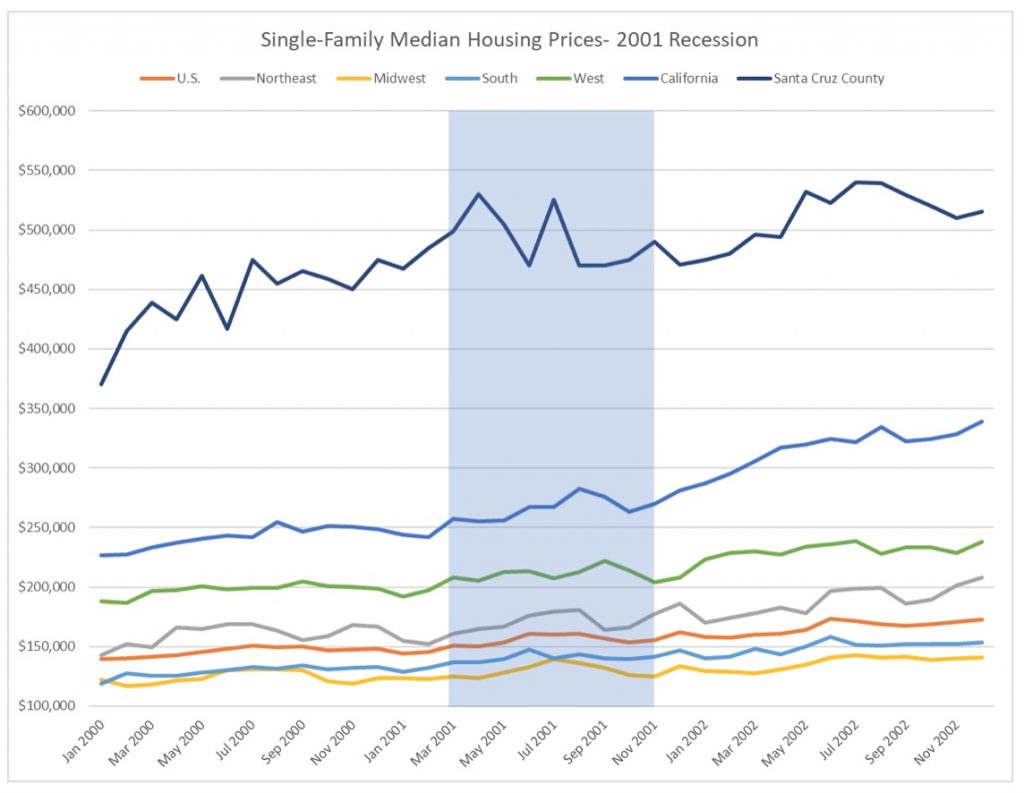 Great Recession: Also known as the housing crash, this recession certainly did have an impact on pricing. First, though, let’s discuss briefly why the recession occurred. A lack of lending regulation and reckless lending practices led to MANY unqualified buyers getting qualified for way more than they could afford. When the market shifted, all those borrowers defaulted on their loans. This recession lasted 18 months from Dec 2007 to June 2009. We have US, regional, California, and local monthly and yearly data. Every region in the US had two consecutive years of declining median home price. The US was -9.8% from 2007 to 2008, and -12.5% from 2008 to 2009. California saw massive loss in median home price in both 2007 and 2008. California’s median home price dropped 37.8% from 2007 to 2008 and 21.1% from 2008 to 2009. Santa Cruz County was -23% from 2007 to 2008 and -15% from 2008 to 2009.

Conclusion: The real estate market isn’t recession-proof if it is the cause of the recession. Fortunately, proper legislation and regulation will ensure that a subprime mortgage recession won’t occur again as lending practices have been strengthened and buyers are highly qualified. Another important note is that this recession particularly affected the higher-price areas like California. 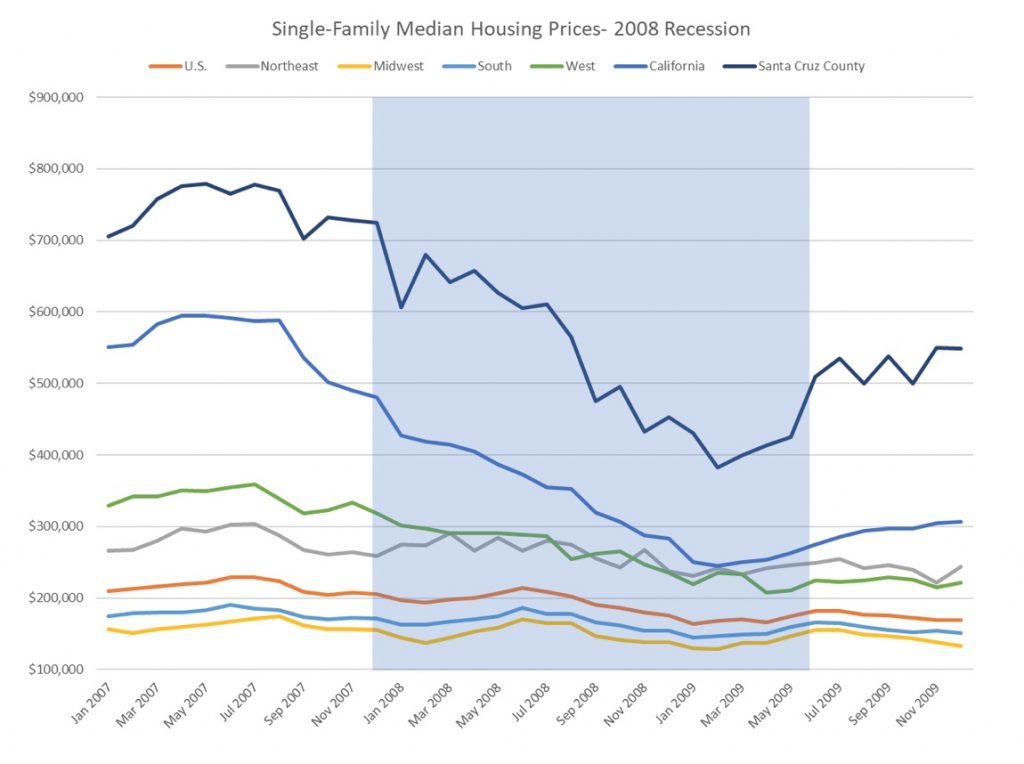 Covid-19 recession: This may be the nation’s quickest recession. Brought on by a global pandemic, the drop was sharp but the recovery was fierce. This recession lasted two months from Feb 2020 to April 2020. We have US, regional, California, and local monthly and yearly data. The worst month of this recession for real estate actually occurred in May of 2020 when the median price dropped over 10% locally. After that, when the interest rates plummeted, the market took off at a record pace.

Conclusion: Uncertainty creates fear which creates inaction. Once clarity was provided and quantitative easing improved loan affordability, demand soared. The lesson is action during inactive times is when you can get great deals.

Wow, that was a lot. Let’s draw some quick conclusions from the data. Those that are anticipating and waiting for a “crash” in the market, think again. Those that are too nervous to buy because everyone keeps throwing out the big R, don’t fret.

The benefits of real estate go beyond the pride of ownership. It’s also a great inflation hedge (as noted by continuous price growth), has great tax benefits, allows you to build equity from debt paydown (rather than paying rent), and did I mention that real estate performs well during recessions?

Recessions do not mean that housing prices decrease. This isn’t to say that recessions don’t have some impact on housing but through eight analyzed recessions, only during one of them did prices actually drop. The more likely scenario is a brief slowing of growth or a temporary flattening of the trend. For those buyers willing to take the plunge, there are opportunities out there. For those waiting for the market plunge, the opportunity is going to pass you by.

Give me a call so I can help navigate you through these uncertain times.