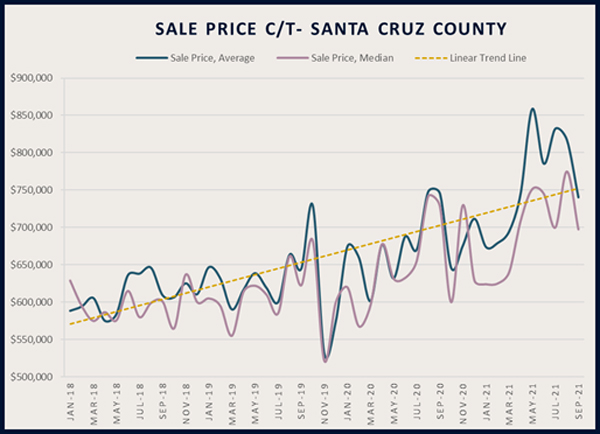 Dax’s Data- What About The Condo Market?

What about the Condo/Townhome market?

As the single-family residence market continues its record pace, I frequently get inquiries about how the Condo/Townhome market in Santa Cruz County compares. Those that own want to know what it’s worth now and those that have gotten buyer fatigue in the single-family space are starting to consider Condo’s or Townhomes as an truly viable alternative. Let’s dig deeper into the Condo/Townhome market.

Note: You may see the abbreviation of C/T and SFR throughout this blog, that stands for Condo’s/Townhomes and Single-Family Residence, respectively.

While the price point is more attractive for buyers, there is a significant percentage of the buyer pool that is resistant to anything but a SFR. Don’t get me wrong, the C/T market has been ablaze too. The average price of a Condo/Townhome in 2021 in Santa Cruz County is $760k, up 11% from last year’s average ($684k). If you’re a buyer, that 11% may be attractive considering the Single-Family market went up 17.57% in that same timeframe. In a 3-year span, the C/T market is up a whopping 24.39%! Talk about return on investment!

C/T Days on Market was 20 in September. SFR under $1MM where sold in less than 12 days, on average. Evidence that when given the choice at similar price points, buyers prefer the Single-Family home.

Part of that “reluctance” is the dreaded HOA Fee. As a buyer, it certainly needs to be factored into overall monthly cost. The average HOA for C/T’s sold in Santa Cruz County in 2021 is $485 per month. “Reluctance” is only an appropriate word when Condo’s/Townhomes are compared to the Single-Family space. The trend of overbidding has bled heavily into the C/T market. C/T’s sold for 2.0% over asking in September, on average. Down from 3.8% in August and 5.8% in July (3 year high). We have now seen 12 consecutive months of C/T’s being sold over asking price, on average.

Months of Inventory for C/T’s was .7 months. Meaning if no more Condo’s or Townhomes came on the market, inventory would be 0 in just three weeks! That is the second lowest Months of Inventory in the last three years. Typically, there are about a ¼ the number of Condo/Townhome listings as Single-Family listings in a given month. That trend held true for September with only 48 new C/T listings as compared to 191 SFR. 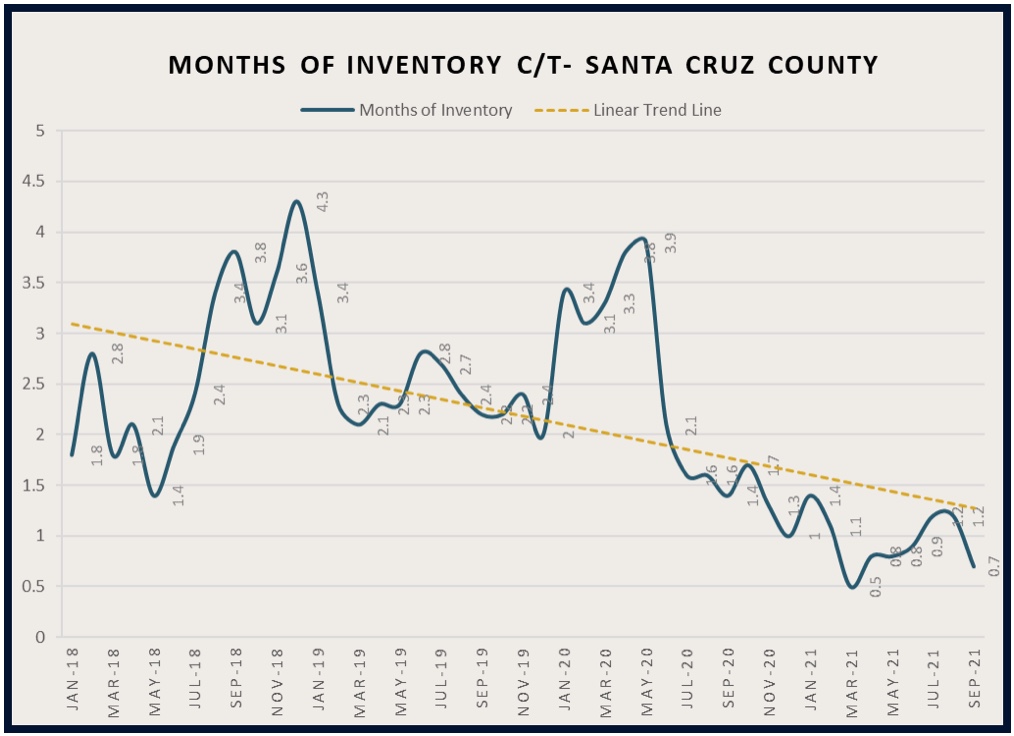 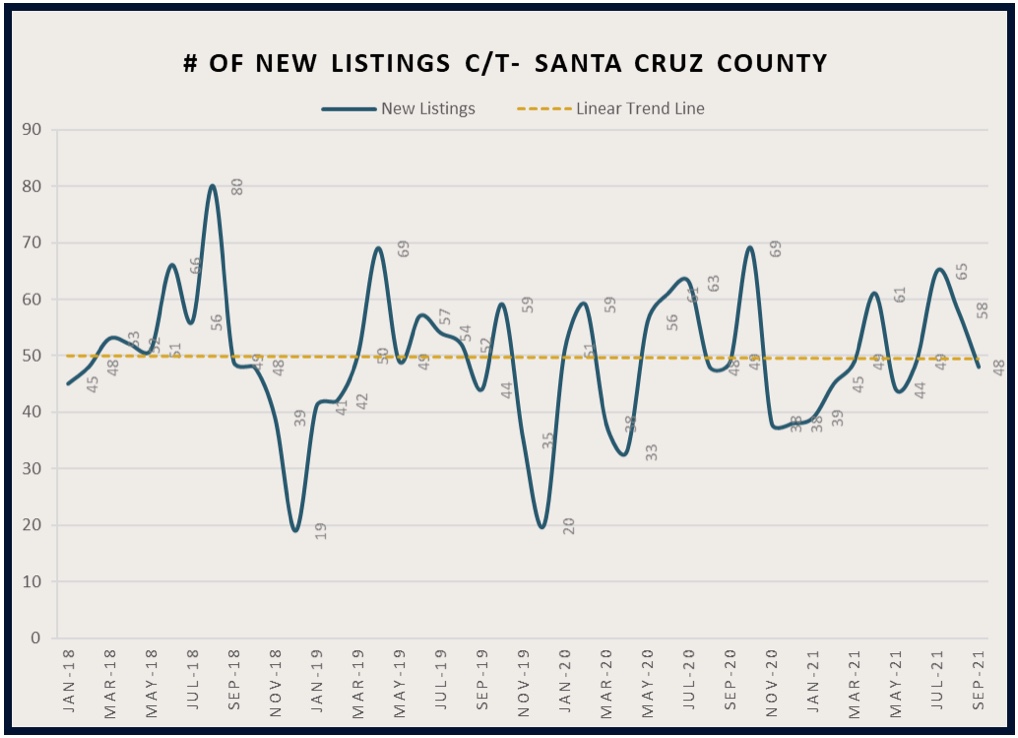 The many of the key metrics run in similar trends to those in the Single-Family. However, the monthly averages can produce much more significant fluctuations. Case in point, Price/SqFt actually increased for C/T from $654 in August to $678 in September. A trend that runs contrary to the SFR market. 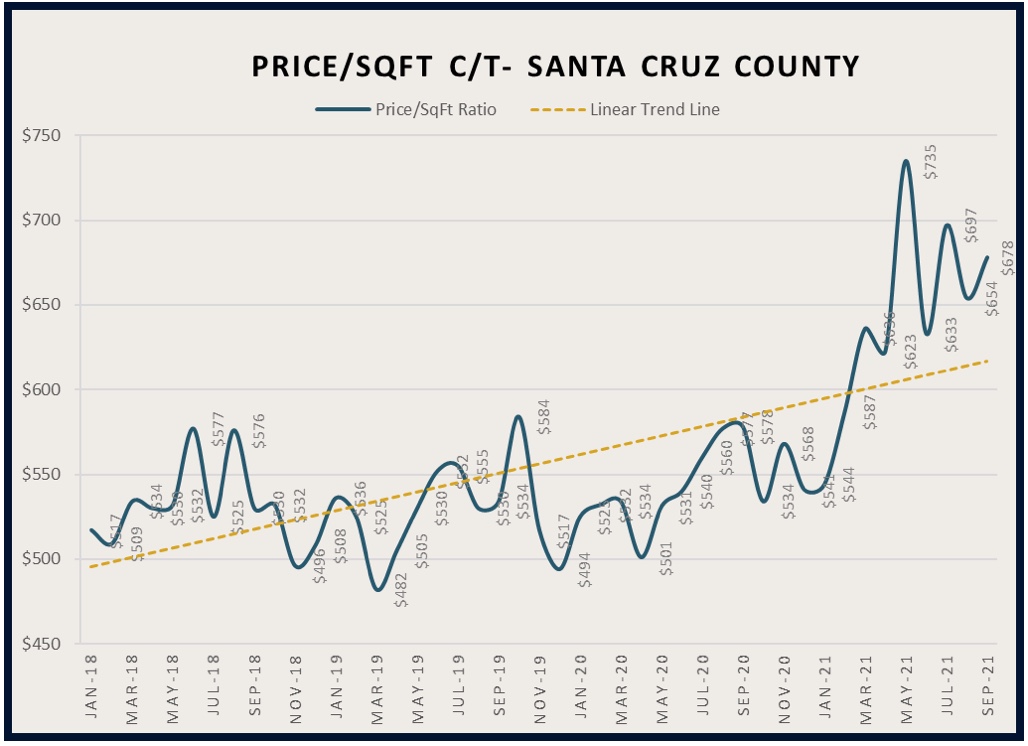 So, how’s the Condo/Townhome market?

A. It’s really hot, just slightly less so than the SFR market. If you own a Condo or Townhome, there has never been a better time to sell. Significant demand for housing and a severe lack of supply has led to strong upward pressure on pricing. So much so that many buyers have been pushed out of the Single-Family market and into an almost equally competitive C/T space. We are seeing a slight cooldown in the Santa Cruz real estate market, but that is typical of seasonal trends. From a buyer’s perspective, both the price point and the consistent coastal appreciation make Condo’s and Townhomes an attractive alternative to the Single-Family market.

Thanks for reading. Please reach out for all your real estate needs.